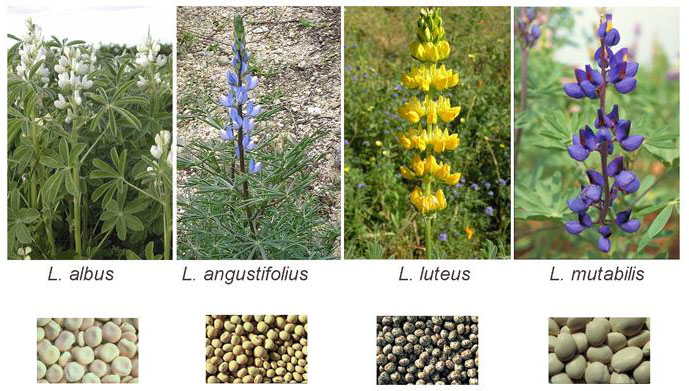 Lupin, a plant of the Leguminosae family, belongs to the genus Lupinus, which includes 450 species. Lupin seeds have been used as human food and animal feed since ancient times. Years of selective breeding have led to lupin strains with reduced alkaloid content, the “sweet lupines”. Four species are of agricultural interest: the white lupin (Lupinus albus), the blue lupin (Lupinus angustifolius), the yellow lupin (Lupinus luteus), and the Andean lupin (Lupinus mutabilis). Lupin seeds are produced in pods which develop on the main stem of the lupin plant. The seeds of white lupin are 8-14 mm in diameter, flattened and of cream colour. Blue lupins have beige or brown-speckled, round and relatively light seeds, whereas yellow lupin seeds are round and resemble soybeans.

The nutritional value of lupin is similar to that of soybean and it contains the essential amino acids lysin, leucin, and threonine. Sweet lupine is grown as a commercial crop in many countries. The annual world production is about 1.4 tonnes, of which 4 % are currently consumed as human food. About 500,000 tons of food products consumed per year in Europe contain lupin.

Lupin allergy
The prevalence of lupin allergy seems to rise in parallel with the increasing consumption of lupin-containing foods; however, the prevalence in the general population is unknown. In Norway, an increasing number of cases with lupin allergy had been registered by the Norwegian National Reporting System and Register of Severe Allergic Reactions to Food after the admission of lupin flour as an ingredient in bread since 2000. The numbers are now reclining due to increased attention and the voluntary termination of lupin use in a number of bakeries.
Lupin allergy occurs by primary sensitisation to ingested lupin protein, sensitisation through inhalation, and occupational exposures. Most often, lupin allergy seems to arise by cross-reactivity in patients with existing peanut allergy. Due to the increasing number of incidents of lupin allergy, lupin-derived ingredients in processed foods have to be mandatorily labelled in Europe since 2006.

Lupin allergens
Lupin seed storage proteins with high homologies to other leguminous allergens are primarily responsible for eliciting allergic incidents. Major seed proteins are α- and β-conglutins, and to a lesser extent gamma- and delta-conglutins. All four fractions are glycosylated storage proteins. The α-conglutin from the “legumin-like” 11S globulin family and the β-conglutin from the “vicilin-like” 7S family both are bicupins containing two cupin domains. Cupins form a large protein superfamily sharing a β-barrel structural core domain.

However, the subunit structures of the conglutins appear to be different in the subunit composition in the different Lupinus cultivars and species. In L. albus, the mature α-conglutin is a hexamer of disulfide-linked basic and glycosylated acidic trimers linked to a basic polypeptide. The β-conglutin is a non-covalently associated heterogeneous trimer. Another cupin is gamma-conglutin, a basic protein with homogeneous disulfide-linked tetramers. In contrast, delta-conglutin is a 2S albumin containing two disulfide-linked proteins. The 2S albumins seed storage proteins belong to the prolamins superfamily containing a characteristic α-helical globular domain with a conserved pattern of six or eight cysteine residues that form three or four intra-molecular disulfide bonds. In L. angustifolius, α-conglutin consists of four subunits, which are non-covalently linked. The β-conglutin contains four larger non-covalently subunits, as well as various minor components. The gamma-conglutin contains monomers that are composed of two polypeptides, and the delta-conglutin is formed by two polypeptides.

The major IgE-binding proteins of lupin have molecular weights of approximately 43-45 kDa, which has been shown by immunoblotting in several studies involving lupin-allergic patients. Other potential major allergens have been identified at 13 kDa, 29 kDa, 34 kDa, 38 kDa, and 66 kDa.

Case from the Food Allergy Register

In a case monitored by the Norwegian National Register for Severe Allergic Reactions to Food, a patient with peanut allergy experienced an allergic reaction after eating a particular brand of hot dog bread. Evidence could be provided that the hot dog bread contained proteins from lupine but not from peanut. Crossed peanut-lupine allergy can have clinical significance. The bread producer confirmed the use of lupine flour and changed the ingredient list.

The use of lupine in foods has increased considerably during the past decade, reflected by a corresponding increase in reported lupine-induced allergic incidents. Detection of lupin proteins in food has previously been based on the use of patient serum. A novel sandwich enzyme-linked immunosorbent assay (ELISA) for the detection and quantification of lupin in processed foods was developed in our laboratory, using a polyclonal rabbit anti-lupin capture antibody and a biotinylated conjugate of the same antibody for detection. The antibody was highly specific for lupin, apart from minor cross-reactivities to other legumes. The assay had a detection limit of 1 mg/kg and was successfully used to quantify lupin protein in various food matrixes. Recoveries ranged from 60 to 116%.

Linear six-point calibration curve, based on the standard curve obtained using the lupin protein standard in the sandwich ELISA

See our publication in Journal of Agricultural and Food Chemistry here

Monoclonal antibody to lupin protein
Monoclonal antibodies (mAbs) against lupin seed proteins were generated in mice by immunisation with a protein isolate from L. albus. An IgG2b antibody was produced that recognized α-conglutin. The mAb inhibited the binding of IgE from patients with positive skin prick tests to lupin proteins in a competitive ELISA by approximately 30%. Furthermore, it was shown that the mAb could be used to develop a sensitive method for the detection of α-conglutin in foods.

Furthermore, it was shown that the mAb could be used to develop a sensitive method for the detection of α-conglutin in foods.

See our publication in Journal of Agricultural and Food Chemistry here

Allergenicity of lupin allergens
Lupin allergy seems to appear in patients with an existing peanut allergy. IgE-binding studies towards fractionated lupin seed proteins, and peanut and almond proteins were performed using sera from patients with confirmed lupin allergy. Immunoblotting and ELISA experiments demonstrated IgE binding to all lupin conglutins (alpha, beta, gamma and delta) as well as to peanut and almond proteins, with a unique IgE-binding profile for each patient. Alpha-, beta-, gamma- and delta-conglutins are candidate allergens in lupin and suggest a particularly strong allergenicity of alpha-conglutins. The presence of cross-reactive allergens in lupin, peanut and almond could be shown.